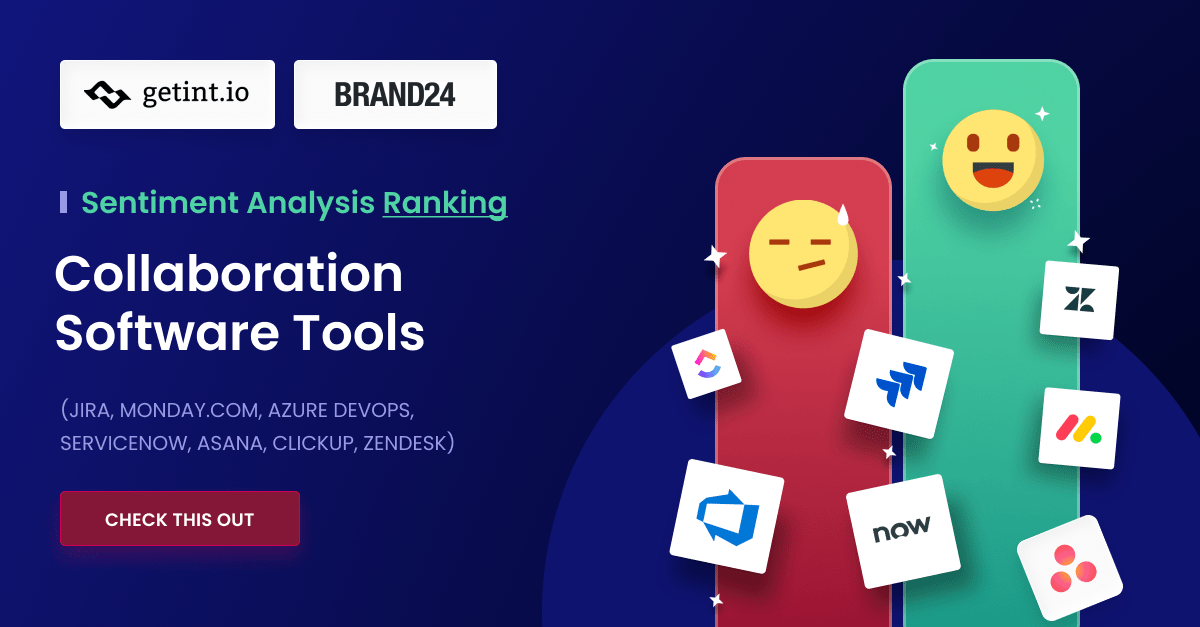 How about analyzing, which Collaboration Software Tool has the best sentiment (most mentiones with positive sentiment)?
We’ve analyzed the mentions all over the web for a month, to check which of the following tools is used in the most positive, and negative contexts:

Disclaimer: It’s not a professional research, done with sentiment analysis professionals, rather an analysis, an exercise, so some some small mistakes might have been made. We did our best to avoid them, by deleting all the noise (f.e. by setting out dedicated filters, improving the formulas from day to day based on the results we saw).
But there is always a possibility, that we skipped something.  So take the results lightly. If the community will like it, we’ll prepare the next editions, trying to be better, and better.

There are a lot of rankings about software, G2, Capterra, Gartner, and probably many others. Most of them are focused on features, some on reviews, others on income and market share. But… none of them are about emotions, the sentiment.
Jacek Wizmur, Co-Founder of Getint.io

In a very competitive market, most of the available tools are very similar in terms of core functionalities.

So… what differentiates them?
What makes people choose one over the other?

UX? Is it really?
Performance? Probably.
Completeness? Maybe.
Customization possibilities? Could be.
Deployment option (SaaS vs OnPremise)? For enterprises, it’s one of the factors, sure.
Pricing? At some point, yes.

But… In the end, all the decisions are made by humans. It’s not B2B or B2C – it’s B2H (Business to Human). In the era of social media, and reviews (Capterra, Clutch, etc.) emotions and buzz are becoming more and more a decisive factor. Additionally, people want to work with a tool that has this positive vibe.

As getint.io, we are a platform that helps people integrate software (f.e. Jira – Jira, Jira – Azure DevOps, Asana – Azure DevOps, ServiceNow- ServiceNow, and so on), or migrate from one software to the other (f.e Monday to Jira). For us, there is no one mighty, go-to software that always is the best. We’re not biased. The practice taught us, that each is best for some scenarios, and the main goal is the Customer’s satisfaction.
If it works, it’s good.

We did not want to prepare a report to state that one software is better than another, or more liked than the other. We wanted to see, which drives the conversation in the most positive, or negative context. In addition to that, we wanted to check the volume of mentions all over the web, to see which seems to be the most popular tool.

A bit of history

What may affect the number of mentions, is the fact of how long each tool is on the market – how much time it had to build a customer base, willing to talk about a tool.

Jira is the oldest tool, it was the first to make the way for others. ServiceNow was launched just a year later. The most recent ones are ClickUp, and Monday.com – they could use the lessons learned from their predecessors.

How we did it (the Collaboration Software Tools, Sentiment Analysis report)

Getint.io team was collecting data on Jira, Azure DevOps (including ADO keyword), ServiceNow (including keywords like “snow platform”, and “now platform”), Monday.com, Asana, ClickUp, and Zendesk for more than a month, but for this analysis, we will take the dates from 27.01 to 27.02.2022.

This report was possible thanks to our friends at Brand24, the Social Media Monitoring tool, which was recognized as the best in business by f.e. Sujan Patel. The tool has great reviews all over the web (Capterra, G2, Software Advice). Brand24 was featured in TechCrunch, Entrepreneur, AdWeek, and Forbes.
What does Brand24 do? The tool is collecting mentions about specified keywords, in blogs, news channels, social media (mostly Twitter, collecting the data from LinkedIn is not possible for now, and collecting data from Facebook, and Instagram is challenging, and limited only to the public mentions). Thanks to that, a brand can see what people are saying about it and can join the conversation.

We were collecting data based on keywords, topics, hashtags, and @mentions across blogs, news sites, and social networks (mostly Twitter).
We analyzed more than 65,100 mentions concerning these Collaboration Software Tools to see, which have the most positive, and the most negative sentiment.

I have to say, it wasn’t as easy, as I thought.
We had to make a lot of work to filter out the web mentions – it turned out that f.e. “Jira” is not that unique keyword, it means “wait”, and “Waxaa jira” means “there is” in some African languages (f.e. Hausa). What’s more “la jira con” means “the tour with” in Spanish. There are also a lot of Twitter users using “jira” in their username. On the other hand, “Asana” is a yoga position, and most of the mentions were about yoga, not the tool. Things were easier with “ServiceNow”, or “Azure DevOps” where mentions were usually about the software we wanted to analyze. In short, we needed to delete a lot of the mentions to keep the data as clean as possible.

Here is an example how the data in Brand24 look like: 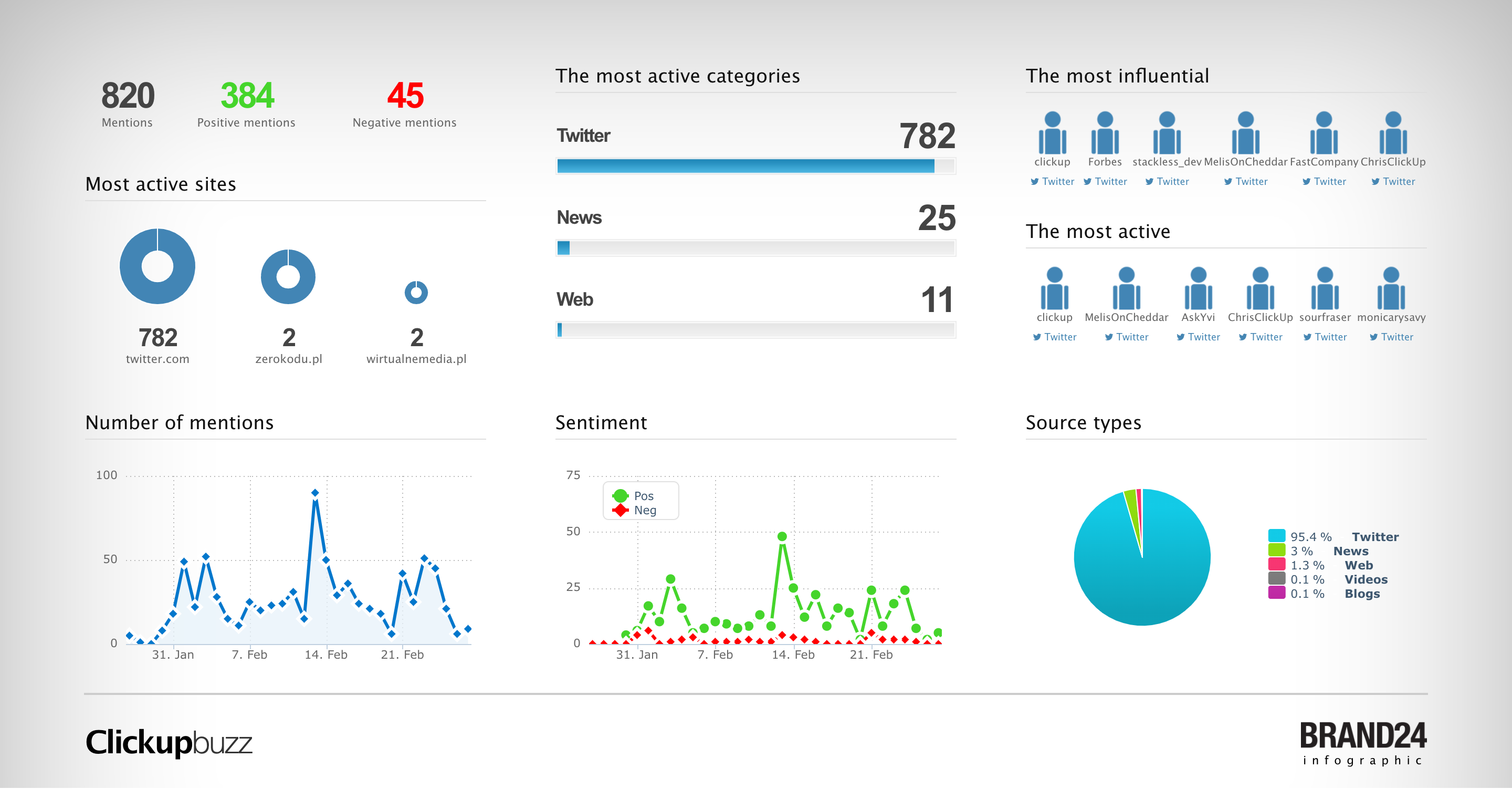 As Tom from Brand24 writes:

“Sentiment analysis, also known as opinion mining, or emotion AI, boils down to one thing: It’s the process of analyzing online pieces of writing to determine the emotional tone they carry, whether they’re positive, negative, or neutral.”

A sentiment analysis system for text analysis combines natural language processing (NLP) and machine learning techniques to assign weighted sentiment scores to the entities. The texts that make up the mentions are converted into numerical sequences that are much more understandable to the algorithm than pure text strings. The second neural network was based on embeddings, which we learned to distinguish between sentiments. The entire text in the found entry is analyzed.

Brand24 stores several thousand words related to emotions – both positive and negative. Each word has an assigned weight. In the first stage, Brand24 divides the content into sentences and analyzes each of them separately in terms of the presence of these words.

Implementation of language rules and context analysis is described in the first stage. The algorithm finding the word “good” should check if the word “morning” has not appeared before or after it, etc. The algorithm contains a lot of additional parameters, such as the distance of positive or negative words from the search subject. Only the qualified results (according to these parameters) are marked as positive or negative.

So in this analysis/report, we are not stating, that Jira is better than Asana, or the other way around. We analyze the emotional tone of the posts of people writing them.

The most popular: Jira

Undoubtedly Jira is the most popular Collaboration Software Tool. Almost 30% of all collected mentiones, were about Jira.

The Controversial One: Jira

Jira had 20.55% of negative mentiones which is the worst result, but… being the leader isn’t easy. There is a saying that “It doesn’t matter what they say about you, as long as they say it” or “there is no such thing as bad publicity”.

The most-liked according to our sentiment analysis is…. 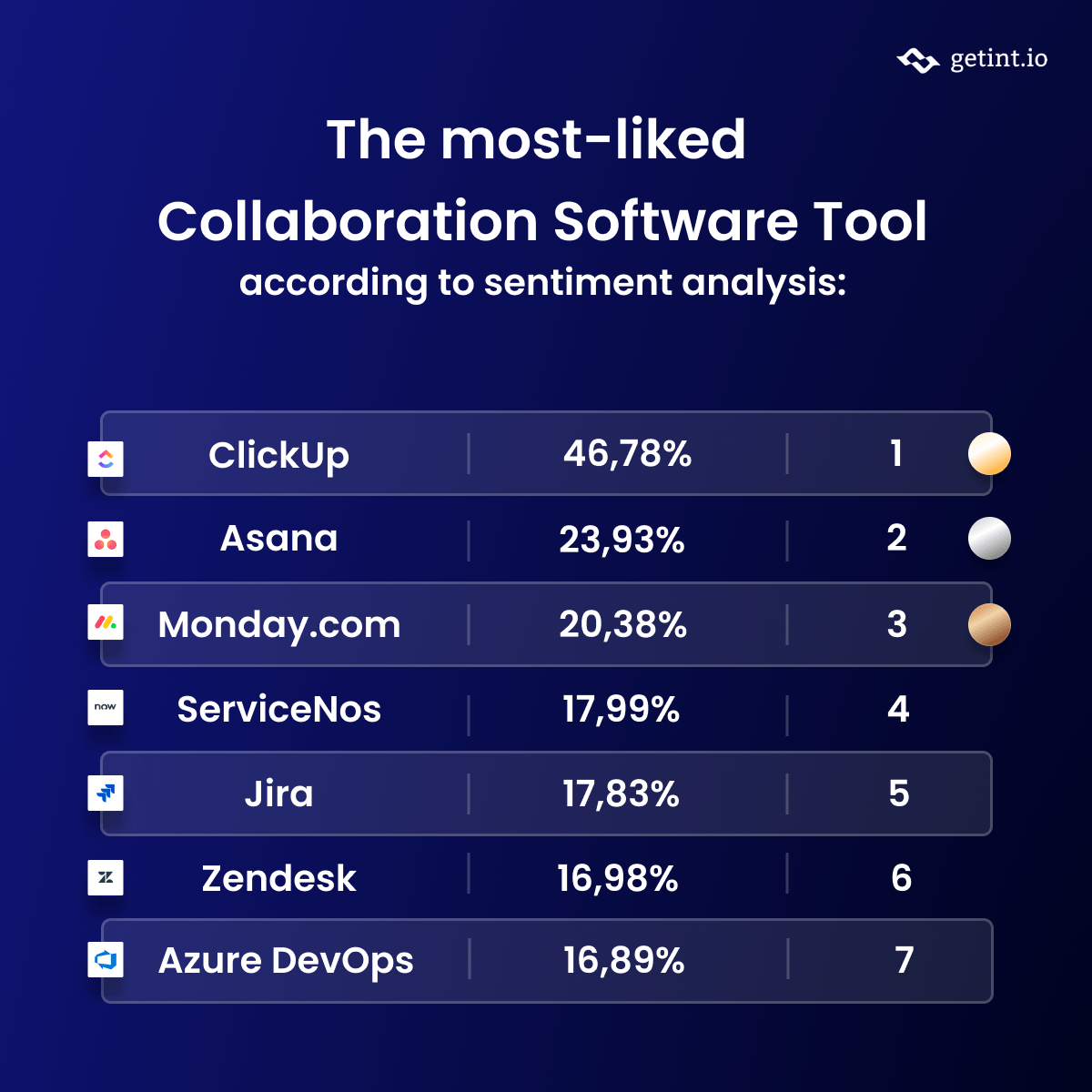 Now let’s dive more into details. Who is the most liked, and who has the most negative related mentiones? How many mentiones were there in total? Here is more in-depth comparison (again only some countries are taken into account here). 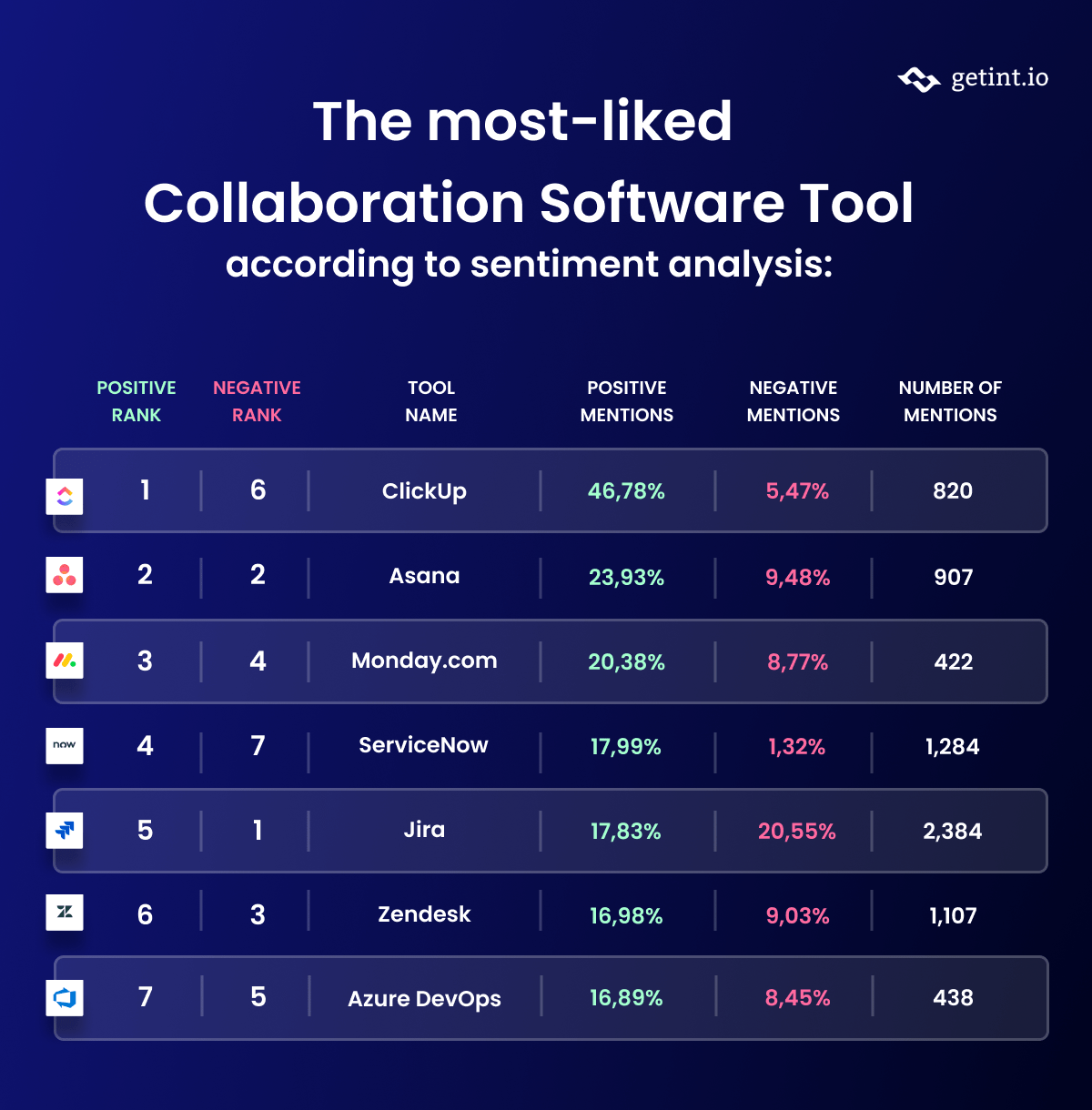 Some of you may still wonder, how all the data looked like (even though they are less relevant). For those, here is the table below. As you can see, the volumes are much bigger. 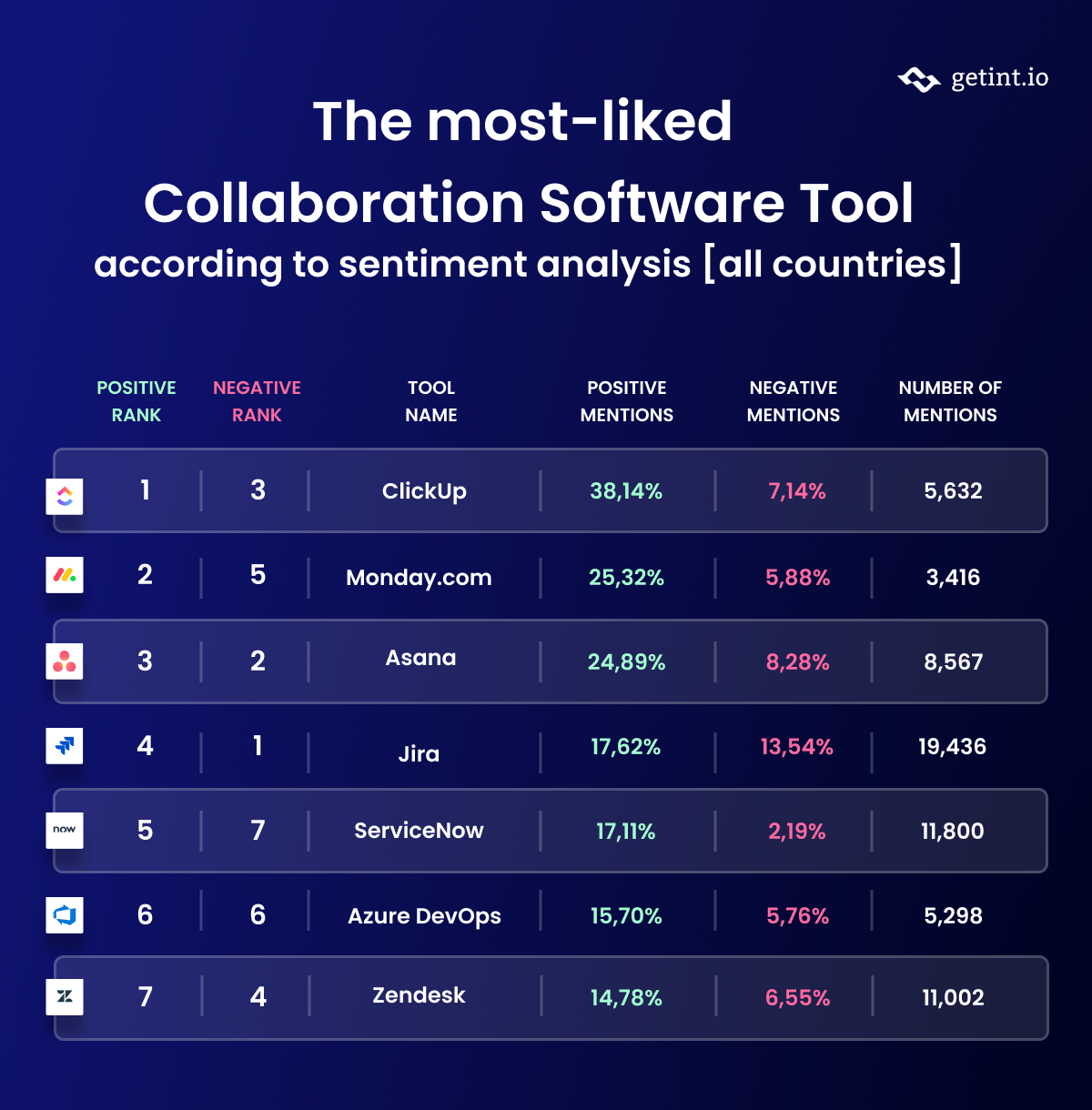 ClickUp – the most positive mentiones

The emotional tone of mentiones related to ClickUp was very positive: 46% when analyzing only some countries (United States, Spain, United Kingdom, Germany, France, Argentina, Australia, Austria, Belgium, Brazil, Bulgaria, Croatia, Czech Republic, Denmark, Estonia, Finland, Greece, Iceland, Ireland, Israel, Italy, Lithuania, Netherlands, Norway, Poland, Portugal, Romania, Serbia, Slovakia, Slovenia, Switzerland, Sweden, and Ukraine – we did it because we weren’t 100% sure we filtered out all the noise from Asian, and African countries, where the keywords we use for analysis also mean totally different things – as described in the first part of the blogpost), and 38% when taking into account all of them. That’s a very good result. At the same time, the volume of mentiones was one of the lowest (3rd from the bottom).

ClickUp is a relatively fresh tool (founded just 5 years ago), gaining market share, generating positive vibes around the product. We will see how it evolves.

Jira – the most popular one

The biggest volume of mentiones was about Atlassian’s Jira. It’s the product that generated a lot of comments – both good and bad. About 17% of mentiones had a positive sentiment, while about 20% negative. What’s worth mentioning, is the fact that the sentiment could be negative, while it wasn’t because of the Jira itself (f.e. “I had such a bad morning, I’m late for work, and I feel terrible. Time to start my day with the Jira board”). So we can say that Jira is generating emotions 🙂 45% of all mentiones had some emotional sentiment, different that neutral.

Azure DevOps – the technical one

Azure DevOps was last in our ranking, with only 16,89% of positive mentiones, and 8,45% of negative. The volume was very low, just 438 (and 5 298 globally). The possible reason? While all those tools are helping teams collaborate, they are addressing different target groups. ClickUp, Monday.com, Asana are used by all departments and are often preferred by the business side (Marketing, Product Owners, Sales). Those are the groups that are more active on social media, than developers, who are targeted by more technical Azure DevOps.

ServiceNow is a strong player somewhere in the middle. Most of the mentiones with ServiceNow brand were neutral, 17,11% positive, and just slightly more than 2% with the negative sentiment. ServiceNow is a very expensive tool, targeting enterprises, and still, the number of mentions was second biggest, just after Jira.

Second best, and second… worst. 33% of mentions with the Asana brand, had any sentiment, out of which 23,93% were positive, and 9,48% were negative. In terms of volume, Asana was 4th after Jira, ServiceNow, and Zendesk.

3rd place on the podium of the most positive mentiones. 4th in the negative ones, and also 4th when analyzing the volume of mentiones.

Zendesk – the… stock one?

This was a tough one – there were a lot of mentiones featuring Zendesk in February, but… just some of them were actually about the product. There was a big volume of mentiones related to Zendesk’s stocks.

The most mentiones on Twitter were regarding Jira, then ServiceNow, Zendesk, Asana, ClickUp, Azure DevOps, and Monday.com.

Check out our integrations here.